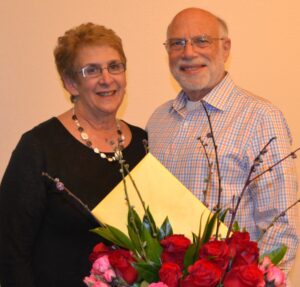 Frank and Janie have been longstanding partners in philanthropy through Jewish Community Foundation of the West (JCFW). They chose to become donors through the JCFW because of the shared values of Jewish community and global giving. In 2000 they decided it was the right time to begin their philanthropic journey with the Foundation. They were both leaders in the Sacramento Jewish Community. Janie was the president of Mosaic Law Congregation’s Sisterhood. After listening to a presentation given by Sandra Felderstein and Barbara Ansel about JCFW they knew it was the “right thing to do”.

Because the JCFW is a Jewish Community Foundation makes it even more meaningful to Frank and Janie.  “JCFW represents a way to make safe and secure contributions because the organization is embedded in honest values with excellent leadership.” Being a part of this foundation allows the Gumperts to give to the Jewish community as well as many other organizations helping make the world a better place. When the Gumpert’s recommend grants they take great pride in knowing that the organizations, both Jewish and non-Jewish, receiving their grants will see that the money is coming from the Jewish Community Foundation of the West. They take great pride in showing organizations that the Jewish community cares about everyone.

Giving tzedakah was not always monetary for Frank and Janie. Janie grew up in a home that gave tzedakah by volunteering time in various organizations and donating various items for those in need. Frank learned from an early age that giving was important no matter the amount. His grandfather shared with him “you can tell the character of man by the amount of money in his pocketbook”. If you give just one dollar to help others when you only have five dollars in your pocket, that says a lot about who you are.  Frank took those words as a life lesson and has been giving some form of tzedakah his whole life.  Frank and Janie feel blessed to be able to give monetarily and through volunteer work at this stage in their lives.

The philanthropic values that are of utmost importance for them are strong ethics, moral behaviors, and doing good for others. Most important is that giving is done without the need for recognition.  Frank and Janie are always doing good because they care about others and not because they need to be recognized. They have chosen over the years to not be anonymous in their tzedakah because they feel maybe seeing their name will encourage others to give, increasing the pool of philanthropy.

Passing on to the younger generations the values of giving and being philanthropic has been very important to Frank and Janie. It has become increasingly important as they moved into the role of being grandparents. When Frank was on the JCFW Board he heard about a fund that Danny Goldstein set up for his children. That was a powerful and very tangible way of passing down the values of tzedakah to the next generation. They decided to set up a fund for their children to give them a hands-on opportunity to be philanthropic, to work together as a family, and make giving a part of their lives. This has had tremendous success and their 4 children, their spouses and now grandchildren are all engaged in tzedakah on an ongoing basis. They have passed on a legacy of giving to the next generation.

The Gumpert offspring are all proud of the legacy their parents have set-up and hope to model their philanthropic giving. Currently, their grandchildren are beginning their tzedakah journey in religious school at Congregation B’nai Israel, separation of allowance money into saving, giving and spending, making crafts and giving money to underprivileged communities, and helping to raise money and awareness for pediatric cancer. The entire Gumpert, Cohen, and Grossman families are all involved in giving. It appears that being philanthropic is in their genetics.

The JCFW has Frank and Janie to thank as they are model philanthropists who have helped make the Sacramento Jewish community stronger through their tzedakah. They have modeled giving and have encouraged many others to give.  May we all be blessed to give tzedakah with our whole hearts like Frank and Janie Gumpert. The JCFW is lucky to have their ongoing support and commitment to giving. 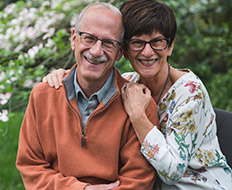 Sharon and Larry Saltzman each have 35 plus years of giving back to the community. Larry is a retired physician and Sharon a freelance designer. They have worked together in business and they work together to support the Leukemia and Lymphoma Society, Larry as an Executive Research Director and Sharon as TNT League Co-Chair, Greater Sacramento. This cause is very personal to them as Larry continues to be in remission from an aggressive form of both of these diseases. They are both founding members of the Land Park Association and served on the Mosaic Law Congregation Board of Directors. Sharon is an associate member of TDX and a past Israel Bond Chairwoman. Using her professional skills, Sharon was a volunteer at the JCFW doing design work for our organization. One of the most important roles for Sharon was her time on the Jewish Federation of the Sacramento Region Executive Committee, first as Treasurer and then as 1st Vice President. It was during that time that Sharon saw a need to fund teen trips to Israel and she and Larry provided the seed funding for the Teen Trip to Israel Endowment, held at the JCFW and benefiting youth on Federation sanctioned trips to Israel. This fund was started with $25,000 in 2006 and has grown to $80,000 while providing numerous students with monetary stipends for life-changing experiences, defining the true definition of an endowment with preservation and growth of principal while at the same time distributing funds.

Larry serves on the Shalom School Investment Advisory committee as well as the JCFW Investment Committee and has served on the JCFW Board of Directors since 2009. Both Sharon and Larry are committed to furthering the legacy of our Jewish community through their donations of time and funding at the Jewish Community Foundation of the West. And just last year they chose to fulfill their Life and Legacy commitment creating a new Endowment benefitting Mosaic Law Congregation.

Sharon and Larry answer the question of why fund our Life and Legacy commitment now. "We believe that endowments are the way to build a strong community. A decade ago, we endowed a fund at the JCFW and we are proud to see the impact that it has had. We decided to fund our commitment to Mosaic Law through the Life and Legacy program this year, so we can once again see the benefits to our community in our lifetime." 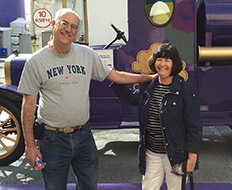 Lynn and Mike Dean are both attorneys. Each has served on the board and then as President of Temple Or Rishon (TOR); although when Mike was president it was called Sunrise Jewish Congregation. Their devotion to TOR is tremendous with Mike overseeing the purchase of the land the synagogue is built on and Lynn overseeing the construction of the Temple’s first permanent home. As the then rabbi of TOR, Marvin Schwab, joked, in a reference to a saying regarding R. Moshe ben Maimon (the Rambam),”Mi Dean ad Dean, lo kam k’Dean.” (“From Dean to Dean, there was none like Dean.”) Both Mike and Lynn have served on the board of the Jewish Federation of the Sacramento Region, with Lynn also serving several years as its President. Mike has leant his time to Shalom School, AIPAC and the JCRC. In addition, Lynn was President of the Federation’s Women’s Division and served on the Placer County Commission on Aging. Mike, on the other hand, has lent his time to the Shalom School board, AIPAC’s Northern California Advisory Committee, and to the JCRC.

Of course, with respect to the Jewish Community Foundation of the West, Mike just recently ended his 3-year term as JCFW president in 2017, where he provided terrific guidance over many changes and wonderful growth. Mike has been on the JCFW board for 9 years and remains on the JCFW board at this time serving not only as a board member, but also as a member of the JCFW Investment Committee. Not to be outdone, Lynn preceded Mike on the JCFW board serving as its secretary and on its Executive Committee 9 years, Mike and Lynn have over 30 years each of giving back to our community.

And, as if that were not enough, in addition to participation in JCFW’s Life & Legacy program and their other tzadakah on behalf of both Jewish and non-Jewish causes, last year Mike and Lynn chose to directly fund the Temple Or Rishon Legacy Endowment, held at the JCFW.

In their words; "We support Life & Legacy because it is important to us that we do our part to ensure that the Jewish institutions that mean so much to us are financially secure in the future. And, we chose to make a portion of our gift during our lifetime so that the endowment fund could begin to grow now."

For more information about the LIFE & LEGACY Program and how you can make an impact with your treasured organizations, contact Pam Herman, Executive Director at pam.herman@jcfwest.org.

Grants Made
# of Donors
Funds Under Management
$
Million

WHAT DONORS TELL US

KIND WORDS FROM OUR DONORS

"JCFW has been the trusted steward of our funds to ensure a brighter future for our community."

"Leaving a legacy gift to Hillel is part of our responsibility to maintain and grow the Jewish Institutions that enhance our community."

"It is my responsibility to make financial provisions for the institutions I support that will extend beyond my lifetime. I want to share what has been important to me with my children, so that they will know what I have valued the Jewish Community."

"We feel a very strong need to stay connected and to strengthen our Jewish community. We have joined the L’Dor V’Dor Legacy Circle (at B’nai Israel) because we believe strongly that the Jewish community must remain vital and play a significant role in the life of our community and country"